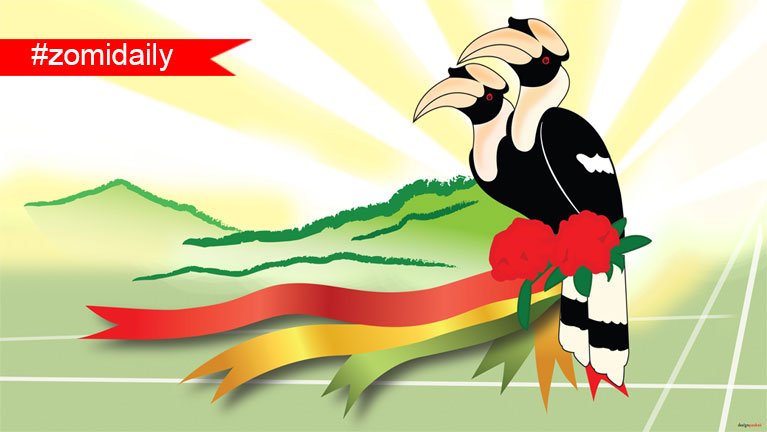 The outsider calls Zomi Community as Chin,Kuki and Lushai. “Zo”(Zhou)is their ancestor’s name and “Mi”(Ming)means people. And in Chinese words “Zhou Ming”. They ruled China in 1027-211 BC. Hence, they were called as Zomi people.

Some of the Zomi are migrated from China around 220 BC and settle in different place and different countries. They are Mongoloid by race, their language belong to Tibetan-Burma group, who enjoy full political freedom from generation to generation under their Chief administration on their own land. They never have a tendency to invade the land of others, and the same way they never want to be invaded and be under the ruling power of the outsider.

However, the British came in 1872 and invade the innocent land of the Zomi in 1890, and ruled over them for 55 years. When India got independence in 1947 and Myanmar (Burma) 1948, the land of the Zomi Country had divided into two groups, one as Northeast India and another as Western Myanmar. Moreover, when Bangladesh became independent country, some of the Zomi were permanently divided and separated within their own land. Therefore, Zomi were scattered through three countries in Western Myanmar, Northeast India and Bangladesh. This boundary replaces the original of Zomi feeling and became a kind of permanent disease for the Zomi. The economic life of the Zomi is governed by what may been called the primitive economy. They are merely self-sufficient and they have no surplus food. Agriculture is the basic of the economy.

The land of Chin State is Located at the Western part of Myanmar bordering with India and Bangladesh. The Chin State constituted out of the Chin Hills on 4th January 1974.The land is a mountainous region covered with teak and bamboo forest. The Famous peak and mountains of their land are Thangmual (Kenedy), Innbukmual, lunmual,Bawipamual, Khonumual(Fortwhite) and Awtawrawmual, Where as Rivers are Meitei gun(Mani pure Rivers), Ciau, Bawinu, Lemro, Mitta and Mong are the most important rivers in their land. Rith is the largest lake in the Chin State. The Whole countryside is covered with vegetation. Wild beasts like lions, tigers, leopards, bears, boars, elephants, wild bears, bison’s, deer’s wild goats ,foxes, wolfs etc. Moreover, winged birds, hornbills, and sparrow, eagle, parrot weaves birds, pigeon, dove, cuckoo, owl, hawk, wood picker pewit etc.

Though the land does not have a common language, Tedim, Falam and Haka are most widely spoken dialects in the northern part, while Matu, Khumi, Dai and Mara are spoken in the southern part of their Land. Tedim language is the first easy to understand in Chin State. They community used the foreign language called Burmese, because the land does not have the rights to promote its dialects for common language to be used.

Chin State has three climate, namely are Phalbi(Winter Season),Khuakhal(Summer Season) and Tuuk(Rainy Season) in their land. Chin State is located in the Western part of Myanmar between latitude 20 40 North and East of Chin State is Sagai Division, to the South are Magway Division and Rakhine(Zakhai) State. And to the West are the Indian State of Mizoram, Manipur and the Chittagong Hill tracts of Bangladesh. The capital of Chin State is Haka(Khalkha), Chin State has connection with Myanmar prepared by all weather roads and by air at Kalaymyo. Their National Day is celebrated on 20 February every year since 1948, and is considered as an official holiday in the Chin State.

For administrative convenience the whole State in divided into 12 townships. The townships namely are Tedim, Tonzang, Cikha, Falam, Haka, Thantlang, Matupi, Mindat, Rih Khuadal, Rizua, Kanpalet and Paletwa. The Victoria peak located in the South is the highest point in the Chin State. The height of it is 10,018 feet above sea level. In the Northern and central regions, the Zomi occupies the slops only from about 4,000feet to a little over 7,000 feet. In the Southern Chin Hills occupancy extends down slope to 3,500 or 3,000 feet. Chin State is generally less than 90 miles. The total Zomi population both inside and outside of their land is estimated at about four million around.

As before Myanmar (Burma)got independence, physically the Zomi were fine taller stouter than their neighbors in the plain on both the North and the East before, the average highs of the Zomi is from five and four inches to six inches over. However, today they are even smaller than their neighbors; it is very difficult to find men 5 Feet and 10 inches and 6 feet height, because the independence of Myanmar affects their economic and political life in negative way.

In the ancient times, the Zomi people spent most of their time in fighting and hunting. Life was hard and precious, there was constant fighting between tribes and villages. In the Zomi life, religion plays an important role is closely intertwined with everything from the planting of crops to birth, omens, divination and drums guide deaths, and festivals etc. Their beliefs Social-economic and religious significance for the person concerned during and after his life depend on all this function. Animals were killed and sacrificed. Zu (rice bear)is consumed, and singing and dancing go on day and night. The traditional religions of the Zomi were animism. Then, became an indigenous religion called Laipiannism or Pau Cin Hau religion.

Before, Christianity came to the Zomi people they spent most of their time fighting and hurting. They lived with one another to excel in these activities. Life was hard and precious. There was continues fighting between tribes and villages. Communication between tribes and villages was difficult and made and life was unsafe. Famine, epidemics, disease and similar misfortunes were common. All these were believed to because by evil spirit call dawi. After, American Baptist Missionary came from the west during the last decade of the 19th century on 15 March 1899 in Chin State. The Zomi community was drastically changed by the grace of God.
References:
1. Khup Za Go,Zo Mi Nam Tawh Kisai Thu(New Delhi: Zo Research Community Centre,2001).

6. Moses C.Tehloh ,A Theological Response to the Situation of The Chin Refugees in India: A Study of the Chin Refugess in Mizoram (Unpublish B.D.Thesis).Grukul luthern Theological College & Research Institue:Chennai,2008.