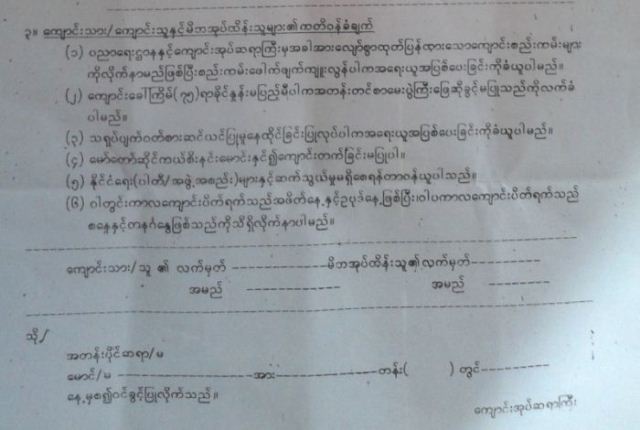 Part of the form for the 2014-15 academic year requires both students and parents or guardians to sign that they will follow the rules related to Uposatha, the Buddhist day of observance.

Chin Christian father P. H said: “We have no choice but to sign the form because we want our children to go to school.”

“Our children will have to go to school on Saturdays and Sundays again during the Uposatha. We, Christian parents, are not happy about this,” added the father, who asks not to be named.

Section C of the admission form indicates that school holidays during Uposatha eve and Uposatha day that fall during the week days will be substituted at weekends.

In Chin State, children are normally forced to attend classes at weekends in substitute of Uposatha days that fall during the week day although the admission form does not include the same requirements.

When asked about the differences between the forms, a school teacher in Hakha told Chinland Guardian that she didn’t have a clue, adding: “Although we don’t have anything about the Buddhist Sabbath in the form, we have to work on Saturdays and sometimes, Sundays.”

Chin parents from Rangoon and Kalaymyo said that they didn’t see any line in the form about the Buddhist holidays, and confirmed that their children had to go to school at weekends during the uposatha in the past.

In Magwe Region, the form also says that both students and parents or guardians should not get involved in any political party or organization.