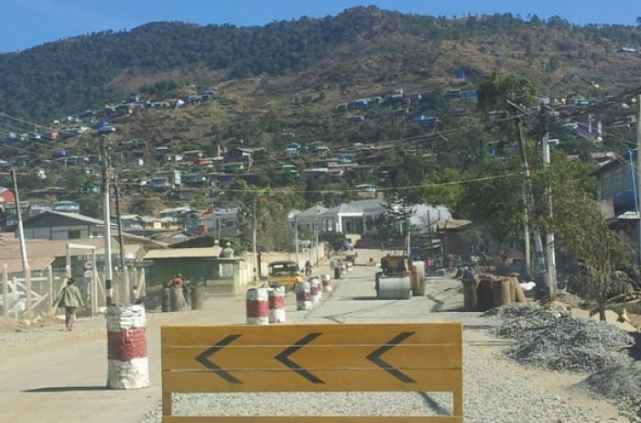 Development in Chin State: will it last one rainy season?

As usual, the State government will try to impress President Thein Sein with an externally smoothed surface of new development works when he arrives in Hakha, Chin State next week.
Hung Ngai, chief minister of the Chin State government, hastens completion of the Hakha main road expansion and asphalting before 19 February when the president is expected to make his second official visit to the country’s western state bordering India and Bangladesh.

At present, the chief minister’s focus is on making the high road look nice and clean, not on ensuring its quality that can last more than one rainy season. It is likely that the country’s leader will look around with a big smile on his face, but not with the eye of a civil engineer.

The former prime minister of Burma’s previous military junta is set to officially open ribbon-cutting ceremonies of an operation theatre of the Hakha General Hospital and a new electric power station. Again, the arrival of necessary equipment including a large ceiling lamp for the theatre is quickly organized not because of an attempt to meet current patients’ need but to please the president.

As the day of Thein Sein’s visit draws nearer, the electric department has also been busy working on the power lines. Of course, these activities have caused power outages for weeks, thus affecting the public. At last, new transformers are now being set up to help stabilize the power supply.

All of these could have been done if the authorities actually care more about the people than an individual. Clearly, the authorities want to make the capital, the seat of the State government, lighted and bright during his short stay.

As Thein Sein is expected to attend the Chin National Day celebration on 20 February, he will try to send a signal to the public that his current government, different from the previous ones, is in support of ethnic peoples and their values. However, this may not necessarily help him gain total trust from the people, who have suffered from betrayal of successive authorities for generations.

Like before, the 69-year-old supremo will probably take a chance, out of tight schedules, to drop by Buddhist pagodas and make a generous donation to the monks. But it is unlikely, if not certain, that he would make the time to visit other places such as schools, most of which are in dire need of an upgrade, and locations related to Christian religion.

It is believed that high-ranking State government officials and heads of departments will be warned not to talk about sensitive issues including the Calvary Christian cross being ordered to be removed from its current hilltop in the western part of Hakha.

They would like the president to return to Nay Pyi Taw with an impression that Chin State is at peace and developing, and that they are well in control of the situation in Burma’s least developed state.

If Thein Sein is not still serious enough about issues facing people on the ground, he would just pat Hung Ngai and his team on the back and go home, without properly seeing the real skin under the facial make-up.

Again, the normal question remains unanswered in the conscious mind of the people: will all this work last one rainy season when the president leaves for the new palace in Nay Pyi Taw? Source: CG