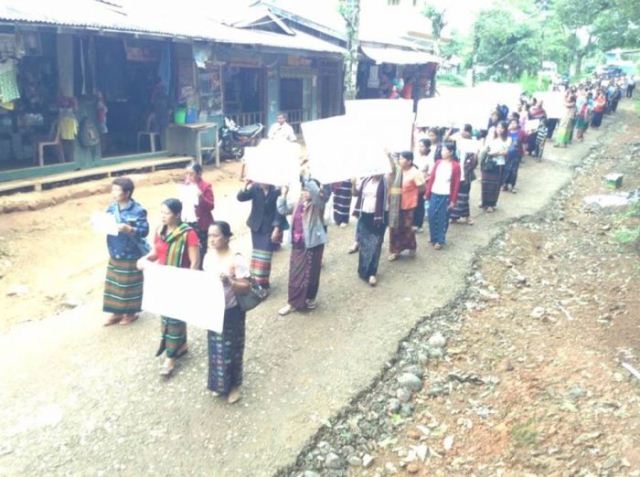 18 July 2014 – The Chin Human Rights Organization called on the Government of Burma to drop/stop their lawsuit against 8 leading Chin anti-rape protestors in Rezua and Matupi.
The activists comprising 6 women and 2 men are going on trial in Matupi, Chin State after being charged for organizing demonstrations without permission against sexual violence perpetrated by a Burma Army soldier.

In a statement released on Tuesday, CHRO said that they [activists] had been summoned to their local police stations and charged under Article 18 of ‘The Right to Peaceful Assembly and Peaceful Procession Act’.

Rachel Fleming, CHRO’s Advocacy Director, said: “It is abhorrent that the authorities will go to such lengths to threaten and silence activists who are bravely speaking out about this issue, while at the same time failing to deliver justice for victims of sexual violence.”

The attempted rape of local woman and the perpetrator

A 55-year-old woman from Rezua Sub-township in the Matupi Township area of Chin State was brutally beaten during an attempted rape by Private Myo Thura Kyaw from Burma Army Light Infantry Battalion No. 269 on 10 June.

The woman was immediately taken to the Rezua hospital after being rescued from the assault on the road between the town and her farm by local farmers who came across the incident. [hyperlink to be inserted]

It is unclear what action, if any, is being taken against Private Myo Thura Kyaw, according to CHRO.

Rezua locals reported to CHRO that they have heard that Private Myo Thura Kyaw may face charges in military court in Matupi.

In a meeting with the locals, Major Aung Thu Win, Commander of LIB No. 269 and the alleged perpetrator’s commanding officer, said: “We, soldiers, cannot bring our wives along with us to our duty station, and we sometimes lose control. We will not let similar incidents happen again. We do a lot for the people but we are never appreciated for our good deeds.”

It reiterated its long-standing call for an independent and impartial international mechanism to investigate serious human rights violations in Burma, including sexual violence, in order to deter further violations and help end the culture of impunity.

Rachel Fleming said: “This most recent sexual violence case in Rezua follows the same pattern as those documented by CHRO at the height of military dictatorship: very violent, and committed with apparent impunity.”

Burma signed the United Nations Declaration of Commitment to End Sexual Violence in Conflict earlier in June, but no concrete action has been taken.

The events, which took place on 23 and 24 June in Rezua and Matupi respectively, drew more than 600 people demanding an immediate end to sexual violence against ethnic women and calling for the perpetrator to be brought to justice.

CHRO said that activists from the Zotung Women’s Organization (ZWO) in Rezua Sub-township applied to the Rezua police station for permission to hold a demonstration on 15 June.

Two days later, Ha Mang, Rezua Sub-township Administration Officer, threatened and warned more than 100 local women that ‘they would throw away Rezua’s chances of being given State-funded development projects if they went ahead with the demonstration’.

He reportedly urged them to forgive the Burma Army soldier, according to CHRO.

In Matupi town, activists from the Matupi Women’s Organization (MWO) applied for official permission to hold a demonstration from their police station.

Charges and the trials

On 25 June, the eight leaders from both Rezua and Matupi were summoned and interrogated at their local police stations.

The Matupi court reportedly summoned them again on 30 June and asked them if they would need a lawyer. The court then issued an official letter permitting them to be represented in court, according to the leaders.

Local people in Rezua Sub-township requested the police in Rezua to withdraw the charges against the four women leaders.

Rezua Sub-township police officer Thein Zaw Hlaing reportedly responded that the order to file the charges came from Chin State Chief Minister Hung Ngai, so it is impossible for Rezua police station to drop the charges.

On 28 June, women leaders and Christian pastors met with Chief Minister Hung Ngai in Matupi town. He reportedly repeated the warning not to hold this kind of demonstration, as it would result in a ban on the Matupi area receiving development aid.

CHRO said that the Rezua leaders first appeared in court on 4 July while the trial for Matupi leaders began on 14 June.

They were summoned to appear in Matupi District Court on 15 June again but the date was postponed for no obvious reasons.

Thang Zing from MWO told CHRO: “All the people here know that this horrible incident took place, and that we are standing on the side of truth. Yet we are being prosecuted for standing for the truth. There is no rule of law and no human security for our people.”

Rachel Fleming continued: “This issue goes right to the heart of Burma’s peace process. How can ethnic women ever feel truly safe while Burma Army soldiers, who appear to have a licence to rape with impunity, are stationed nearby? There needs to be a withdrawal of Burma Army troops from towns and villages in ethnic States as part of the peace process. Impunity has to be addressed, including via reform of the 2008 Constitution. There can be no lasting peace without justice for such crimes.”

According to sources from Matupi, the Rezua leaders are scheduled to re-appear in court on 22 July, and Matupi leaders on 23 July.