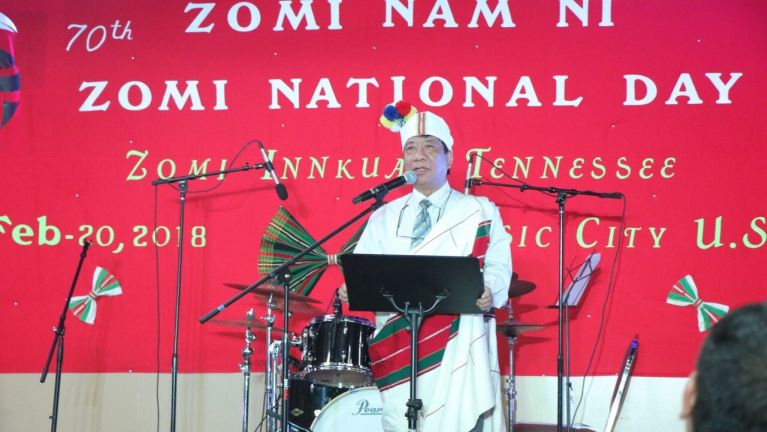 Three score and eleven years ago today, on the 20th February 1948, our forefathers brought forth to the Chin Hills, a new polity, conceived in liberty, and dedicated to the proposition that all men are created equal (no slaves, no chiefs), thereby abolishing the system of hereditary feudalism and replacing it with the power of the people. We here highly resolve that this cause shall not be forgotten in vain and shall live and endure from generation to generations unborn. And that this land, under God, shall have a new birth of freedom and equality – and the government of the people, by the people, for the people, shall not perish from the Chin Hills. We, the Chin people, are able to preserve and celebrate our Chin National Day because of our National Unity. This legacy was left to us to preserve by our consecrated forefathers, who struggled undauntedly and tirelessly for the liberty and the betterment of their progenies. The birth of our Chin Nation Day was a very momentous achievement and was the result of the relentless struggle of our forefathers.

There was no documented history of the Chin (Zo) in the pre-colonial era; the myths, the folk songs, the ballads and the genealogies were the only historical records, which were passed on from generation to generation by word of mouth. Supposedly, we, the Zo, migrated from Tibet down to the Chindwin Valley and settled there for a considerable period of time to establish a small Zo kingdom, which Fan Cho, a Chinese diplomat, recorded in his reports to the Tang Dynasty in the year 862 AD. Some scholars claimed that we have called ourselves “Zo” or “Yo” ever since we settled in the “Zothang” or “Yothang” valley in Tibet.

The misnomer “Chin” might have been imposed on the Zo or Yo by the Bamar back during the time when they dwelled in the Chindwin valley, as two stone inscriptions by the Bama king of Pagan, Kyanzittha, mentioned “Hklang” “Chin”, in old Burmese dating back to the thirteenth century AD. The Zo lived peacefully in the Chindwin valley for many generations, until the Shan invaded Bama territories in the twelfth century. The Shan built a fortress at Kale (Kalemyo) in 1397 AD. However, from about the thirteenth century onward, the Kale valley remained unpopulated up to the time of the British invasion. The Shan continued their raids on the Bamar Kingdom’s Ava and conquered it in 1527 AD. Ava, the capital of the Bamar kingdom, is situated near the confluence of Chindwin and Irrawaddy rivers. This conquest created chaos in the whole Chindwin region and in the Zo kingdom.

No one knew exactly when and why the Zo moved to the Hills. It was presumed that the Shan principalities raided the Zo villages every now and then, so the Zo were forced to hide in the rugged hills. The Zo from the Chindwin region fled to the unoccupied land of the Northwest hills of Kale-Kabaw valley in search of places to hide. The Zo from the west bank of the Irrawaddy River moved to the Arakan hills up to the Chittagong hill tracts.

The oral traditions of the Falam and Haka Zo lineage claim that the Zo originated from Lailun Cave, near Falam Town. The Northern Tedim Zo linneage tradition also maintains that they originated from “Khul”, which means cave. The cave was supposedly situated in the vicinity of the first settlement, Ciimnuai, below the present Saizang village, about seven miles south of Tedim.

The Tedim Zo settled peacefully at Ciimnuai village for at least ten generations and then dispersed to many villages in search of fertile land for cultivation and raising livestock. As time passed, they became more and more isolated, village by village, due to the lack of communication and the ruggedness of the terrain. Eventually, the dialects they spoke diverged from one another, and they became complete strangers. They established villages by banding together three or more of the families (Beh) and appointed the strongest man as the headman (Hausa). Tribal wars broke out frequently. They fought each other and subdued other villages in an attempt to gain supremacy among the villages. The conqueror of multiple villages became the Chief of that village track. The villages, which came under the Chief’s jurisdiction, were levied tributes and an annual tax. Eventually, an arbitrary chieftainship feudalism system was born.

General Aung San succeeded in concluding an agreement with the ethnic indigenous people, Bama, Chin, Kachin, Karenni, and Shan at the Panlong Conference on February 12, 1947, from which the Union of Burma was forged and after which has been celebrated as “Union Day”. The Karen attended the meeting as only observers. In April 1947, a new constitution was drafted. In line with the Panlong agreement, Burma gained her independence from the British on January 4, 1948, precisely at 4:20 AM, the British Flag was lowered and the Flag of the Union of Burma was hoisted up in the capital city of Rangoon. The flag of the Union of Burma consisted of one big star representing the Union of Burma, surrounded by five smaller stars which represented Chin Special Division, Kachin State, Karenni State, Shan State and Burma proper.

The British colony of Burma finally had come to an end. The declaration adopting the parliamentary democracy system of the Union of Burma convinced the Chin national leaders to abolish the hereditary feudal chieftainship system in Chin Special Division.

At the request of the Chin leaders, the central government formed the Chin Hills Enquiry Commission, consisting of three members, on 5 February 1948. The Commission comprised the first Minister of Chin Affairs Council, U Vumthu Maung, as Chairman, U Thein Maung District Commissioner, as secretary, and U Soe Win, Education Officer, as members. The objective of the commission was to assess the Chin public consensus on the matter of the hereditary feudal chieftainship system throughout the Chin Hills. The Commission’s finding was that the Chin public was overwhelmingly in favor of abolishing the hereditary feudal chieftainship system and replacing it with democracy, which allowed them to determine their future by themselves.

The first Chin Minister, Pu Vomthu Maung, convened a mass conference that met at the Chin Hills Battalion Drill Shed in Falam from 19 through 22 February 1948. The meeting, presided over by Chin Affairs Parliamentary Secretary Captain Mang Tung Nung, was attended by the First President of the Union of Burma, U Soa Shwe Taik, and members of the Chin Hills Enquiry Commission, as well as 5,000 delegates from all over the Chin Hills.

On February 20, under item No.4 of the agenda, a discussion pertaining to the hereditary feudal chieftainship system, Subedar Thang Za Kai from Tedim proposed the abolition of the system. Pu Hang Bung Thang of Kanpelet and Pu Con Mang of Laizo, Falam, seconded the motion. There was a group of 17 young educated people, who were relatives of the Chin Hill Chiefs, and were opposed to the proposal. After a long discussion, the Chin Affairs Minister, Pu Womthu Maung, moved that a vote be taken on this issue.

A resolution to end hereditary feudal chieftainship system was reached by votes with a landslide majority of 5,000 in favor and only 17 opposed. Minister Pu Wunthu Maung praised U Thang Za Kai’s proposal thus, “a proposal not only fit to go down in history but, as it will shape the future of all Chin people, also is worthy to be remembered by every single Chin national”. In lieu of the abolition of the hereditary feudal chieftainship system, the chiefs and the headmen were granted compensation.

However, in 1956, the then Chin Minister, Pu Za Hre Lian, the son of the Zahau Chief, proposed to change the Chin National Day from 20th February to 4th December, which has no political significance for Chin nationals. In protest, the majority of the Chins and the Rangoon University Chin Student Union staged a demonstration expressing their dissidence. The proposed change was unsuccessful.

Another attempt was made in February 1966 to change the Chin National Day to “Chin Special Division Day.” This matter was referred to the office of the Revolutionary Council on 11th July 1966. The office of the Revolutionary Council, in its letter of 25th November 1966, informed the Chin Affairs Council (Chin U See) to carry out the celebration of Chin National Day as before. The Chin Affairs Council issued a notification under letter No. YAKA 29/04 (2) of January 1967, announcing that the Chins would continue to celebrate their Chin National Day as usual and not as “Chin Special Division Day.”