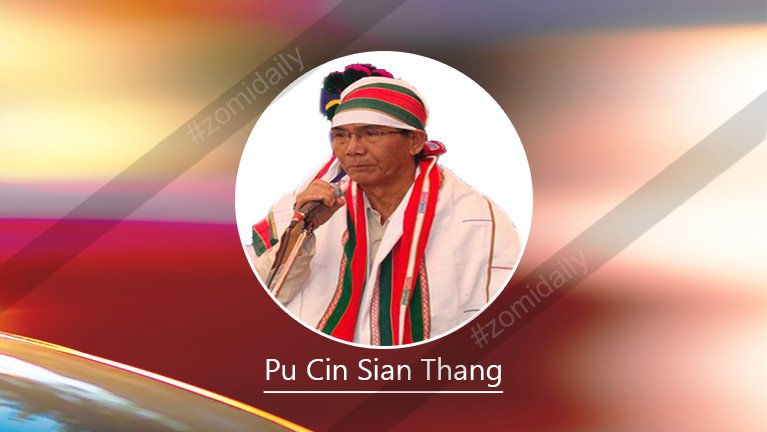 Only Suu Kyi and Her Father Can Be Trusted: Interview with Pu Cin Sian Thang

12 January 2012 [CG Note: As Aung San Suu Kyi’s National League for Democracy Party (NLD) decides to re-enter the Burmese political scene, many of the ethnic parties who have stood by the NLD and joined the boycott of the 2010 elections are now in a dilemma. Chinland Guardian’s Salai Nyein Chan talked to Pu Cin Sian Thang of the Zomi National Congress in this exclusive interview. A veteran Chin politician and leader of the Zomi National Congress who was elected in the 1990 elections, Pu Cin Sian Thang has spent a lifetime in Burmese politics. A former political prisoner, Pu Cin Sian Thang’s son and nephew are now serving long-term jail sentences on their political roles during the 2007 uprising in Burma.]

Chinland Guardian: We learned through chinworld.info that the Zomi National Congress (ZNC) and the Chin Progressive Party (CPP) recently met in Rangoon. Was this a formal meeting? Can you share with us what was discussed? Was there any agreement made between the two parties?

Pu Cin Sian Thang: It wasn’t a formal or official meeting in any way. It was all by chance. It was the leaders of CPP in Rangoon paying us a visit just because of ZNC status as a party that won [parliamentary] seats in Chin State [during the 1990 elections]. We didn’t discuss much. We mainly talked about the current situation and exchanged our views on what should be done for the betterment of Chin State.

Chinland Guardian: Now that you have talked with the CPP, do you have any plans to have similar discussion with the Chin National Party (CNP) and other Chin groups to exchange views and ideas?

Pu Cin Sian Thang: So far we have no such plan. But we are open to talk to anyone if it is for the good of our people. But we have no plan on doing things in our party’s name.

Chinland Guardian: NLD has registered the party. Is there any plan by the ZNC to follow suit? Or has there been any discussion at all within the ZNC whether to re-enter?

Pu Cin Sian Thang: Neither we nor the NLD were satisfied with the 2008 constitution. After the election law was amended, the NLD chose to enter the race in the upcoming by-elections as a result of the understanding reached between Daw Aung San Suu Kyi and [President] U Thein Sein, where they agreed “to work together on issues of common interests and consider other areas at appropriate timing” following their meeting. The NLD entering the by-elections is a good thing because the new government has amended the election law to allow them to participate in politics. The ZNC is an ethnic-based party and if we wish to re-enter, we need to represent the voice of the people. In order to be able to contest the by-elections, a party has to contest in at least three constituencies. But, there are no constituencies open in Chin State [for the by-election]. We do not have any plans to re-register our party because there is really nothing we can do at this moment even if we do get registered. But we will continue to work for our people within our best capacity.

Chinland Guardian: What is the ZNC position on Aung San Suu Kyi re-registering her party? Do you consider this the NLD betrayal of the ethnic parties, who have stood by them all through these years, especially within the Committee for Representing People’s Parliament?

Pu Cin Sian Thang: Burma has had many leaders. But Aung San Suu Kyi and her father have been the only two people who really, truly care about the ethnic people. I have seen this so clearly within the 23 years I have been working with her. Although the ZNC is no longer a legal party, we continue to have working relationship with Aung San Suu Kyi and I have always respected her and the position she takes. We always agreed with her decision based on our impression of how much she cares about the people and our country. It is important that the advance votes are not the issue again [in the by-elections] as was the case in the 2010 elections. After the government has properly amended the party registration law, I think all those who can should just re-enter and contest [the elections]. It is not like [President] U Thein Sein did not say anything about the conflicts in Kachin and other ethnic areas. He has been talking about it. The Army continues to ignore U Thein Sein’s order to stop the military offensive in Kachin State.

Chinland Guardian: If the ZNC were to re-register as a party, would you consider forming an alliance with the other Chin parties, for example, the CPP, CNP and ENDP?

Pu Cin Sian Thang: As I noted earlier, at the moment it is not feasible for the ZNC to re-register. We will need to closely watch first how they [the Chin parties] work in order to determine whether we can work together with them because the fact of the matter is that these parties in essence entered [the elections] before the party registration law was amended without first considering the desire of our people. It is not good when we just do things at the whim of some leaders in a way that doesn’t include the view and standpoint of the people.

Chinland Guardian: The CNF has just signed a cease-fire agreement with the new State Govt. What is your personal opinion or ZNC stance on this? Do you think this will lead to a permanent peace in the country?

Pu Cin Sian Thang: Armed groups such as the CNF/A, KNU [Karen National Union] are members of the UNFC [United Nationalities Federal Council]. It is not appropriate to singlehandedly make peace [with the govt] when a member of the UNFC is in trouble [under Burma Army military offensive]. Making peace is a good thing. We need to also see how much active armed conflicts we have in Chin State. We also need to look at what good things this cease-fire will bring about. What will follow next? We need to closely monitor what was the motivation behind the CNF/A and the government agreeing to open up Liaison Offices.

Chinland Guardian: Daw Aung San Suu Kyi has said that she trusts Thein Sein, do you think that the ex-general can really be trusted by the ethnic people?

Pu Cin Sian Thang: As I stated earlier, we trust Aung San Suu Kyi. If she says it is good then it must be good. On the one hand, Thein Sein and his new administration claim that they will genuinely steer the country towards peace and democracy. On the other hand, they wouldn’t release political prisoners who are working for democracy. I don’t think Thein Sein’s administration can be trusted because of the way he even denied the very existence of political prisoners while he was in Indonesia. Even army representatives in the National Parliament have all voted in favour of the proposal by U Thein Nyunt to release all political prisoners, yet that has not been implemented. This shows the division within the authorities themselves. But we all know that while there is the view that some change must be carried out, there are also hardliners who won’t obey orders.

Chinland Guardian: How do you see the situation and direction of the country now?

Pu Cin Sian Thang: We still carry on working precisely because we want and hope that our country will change. We do hope change will come someday. Source: Chinland Guardian