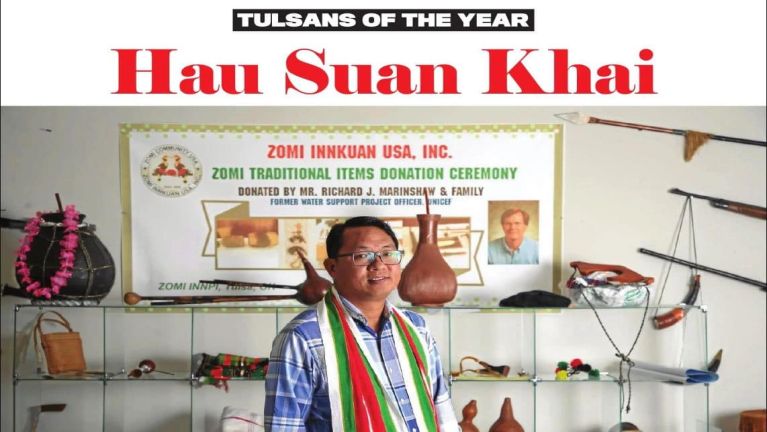 Each year, Tulsa World honors Tulsans who exhibit strength, compassion, leadership and community pride. This year, Hau Suan Khai has been honored “Tulsans of the year 2022” for what he has accomplished in the community.

For many newcomers to the United States of America, the country’s initials might easily stand for “U Start Again.” Hau Suan Khai smiles as he relates this witticism, but it is a sentiment he knows all too well.

“Everything here is different,” he said. “It is more than just the language barrier that many people have to deal with. The Western culture is so very different from the Zomi culture, that for some people it is hard to navigate life in an American city.”

Khai is a member of Tulsa’s Zomi community, made up of some 10,000 members of a people native to Myanmar, the southeast Asian nation formerly known as Burma, as well as India and Bangladesh. While Zomi communities are located throughout the United States, Tulsa has what is believed to be the largest such community in the country.

Helping to guide his fellow Zomi to successful lives in a new country has been Khai’s mission for much of his life, beginning as a volunteer with the Malaysian Zomi community, where his work was honored by the United Nations High Commissioner for Refugees.

“It is important for me to try to help bring a sense of hope to my people,” he said. “When I see someone who has come to me for help, and some little thing I may have done has helped them succeed, it makes me happy in ways that are difficult to explain.”

Like many of his fellow Zomi, Khai fled Myanmar to escape the ruling military dictatorship, living for 10 years in India, where he earned degrees in theology, then in Malaysia. He was finally able to enter the United States in 2016 and came to Tulsa because his sister had been resettled here previously.

“Most of the Zomi who came first to Tulsa did so to study at Oral Roberts University,” he said, adding that almost all Zomi are Christians, and that Tulsa is home to some 20 Zomi churches.

Khai recently completed his four-year term as the chairman of Zomi Innkuan (Community) Oklahoma, which included overseeing the 2022 Zomi Khawmpi USA, the biennial national conference of Zomi communities throughout the country, which was held in July in Tulsa.

The three-day event featured everything from sports competitions and a talent show dubbed “Zomi Idol,” to forums addressing political concerns and youth issues. But primarily, Khai said, it was in essence a family reunion.

“The Zomi are an ethnic minority in Myanmar, in India, wherever we are,” he said. “Communities were close, so it was like we all knew each other. But after resettlement, we are spread out all over the country. So this conference is important to us, because it brings our communities together again.”

Khai said about 5,000 Zomis came to Tulsa for the conference, which garnered national press attention from the New York Times, which focused on the number of restaurants owned by Zomi, and how the food they serve reflects or reimagines traditional cuisine. It also showed to the Zomi community that Tulsa was a welcoming place.

“Our community is growing, but mostly it is people from Zomi communities in other states moving to Tulsa,” Khai said. “Tulsa is the place that many Zomi are looking for.”

While Khai’s tenure as chairman has come to an end, he said his commitment to helping his people will continue. He is a member of the board of Rising Village, a local organization that works to help refugees become self-sufficient, and in his day job as an on-site manager for Key Personnel, he is often able to help fellow Zomis through the process of finding jobs.

“I will always be looking for ways to help my people,” Khai said. “It doesn’t matter if the people I might help remember me. Just seeing that they have had some success in their lives here in America makes me happy.” By James D. Watts Jr. Tulsa World Magazine 39: Tulsans of the Year 2022 Page 52, 53