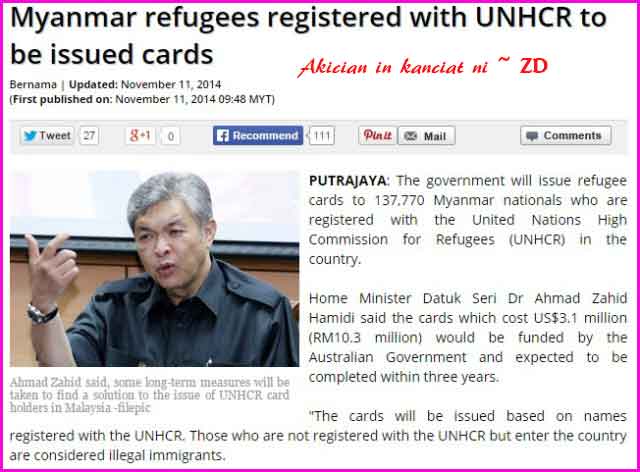 Myanmar refugees registered with UNHCR to be issued cards

“According to the Immigration Department there are an estimated 20,000 Myanmar nationals who are not registered with UNHCR but have these cards which may be fake,” he said told reporters after receiving a courtesy call from the director of International Protection, UNHCR Geneva, Dr Volker Turk at his office, Monday.

Ahmad Zahid said, some long-term measures will be taken to find a solution to the issue of UNHCR card holders in Malaysia.

According to him, problems involving Myanmar UNHCR card holders include crime and murder, among others.

In addition, UNHCR is seeking to resolve educational issues faced by Myanmar children with the Ministry of Education, he explained.

Meanwhile, Turk said he hoped the issue of Myanmar nationals registered with the UNHCR can be addressed in the coming weeks.

“If you look at the Bay of Bengal some of the movements (from Myanmar) are to Thailand, Malaysia and Indonesia. We very much believe in a regional cooperative framework to resolve this issue,” he added.

“We heard (about the Rohingya population in Cameron Highlands) yesterday and we are working with the Malaysian authorities on this particular issue. It is important to clarify who they actually are,” he added.

Turk said, UNHCR is looking forward for a constructive and oriented dialogue session with the Malaysian government to solve the issue.

“There will obviously be regular dialogues following today’s meeting,” he said.