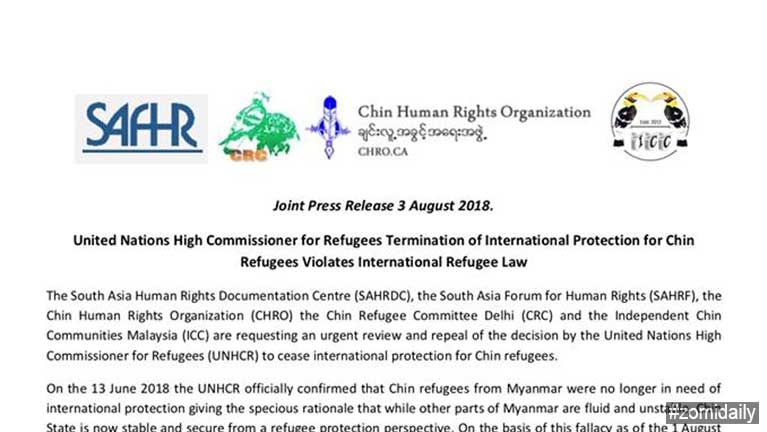 On the 13 June 2018 the UNHCR officially confirmed that Chin refugees from Myanmar were no longer in need of international protection giving the specious rationale that while other parts of Myanmar are fluid and unstable, Chin State is now stable and secure from a refugee protection perspective. On the basis of this fallacy as of the 1 August, 2018 UNHCR has begun the process of individual cessation of protection for Chin refugees.

The decision by UNHCR was delivered with no publicly available evidence defining what constitutes stable and secure conditions, a lack of prior consultations with Chin communities in India or Malaysia and therefore no verifiable guarantee of a safe and dignified return. “We face a very uncertain future, we are aware that it is not safe for us,” said a Delhi based Chin community leader. The decision taken by the UNHCR has left approximately 40,000 Chin peoples’ in India and Malaysia fearing for their future.

UNHCR serves as the guardian of the 1951 Refugee Convention which stipulates that the Convention shall cease to apply to any refugee “ … if he can no longer, because the circumstances in connection with which he was recognised as a refugee have ceased to exist, continue to refuse to avail himself of the protection of the country of his nationality”.

The on-going presence of the Burmese Military (Tatmadaw), responsible for systematic and persistent violations of human rights which still maintain constitutional control over key Ministries enabling them, both in policy and practice to violate human rights with complete impunity has not led to those circumstances. Due to this, it is contested in the strongest possible way that the present country of origin situation represents a fundamental or enduring change for the purposes of art 1C (5) and (6), of the 1951 Refugee Convention.

“Not only is there war in Paletwa Township, Chin State remains heavily militarized where Tatmadaw violate human rights, we also face ongoing barriers to religious freedom,” said a member from CHRO. Due to continued attacks on civilians, which include gross human rights violations in Rakhine, Kachin, Karen, Shan and Chin States, well documented by international media and local sources we contend that the restoration of national protection conditions for the purposes of art 1C (5) and (6) are not currently evident in Myanmar, and in fact have deteriorated in the last several years.

Due to these circumstances, it is contested that the recent human rights situation in Myanmar can be interpreted to mean that the fear of persecution has ceased to exist for the Chin, as well as the assertion that and on return, repatriated refugees could expect an acceptable level of national protection to live in safety and dignity.