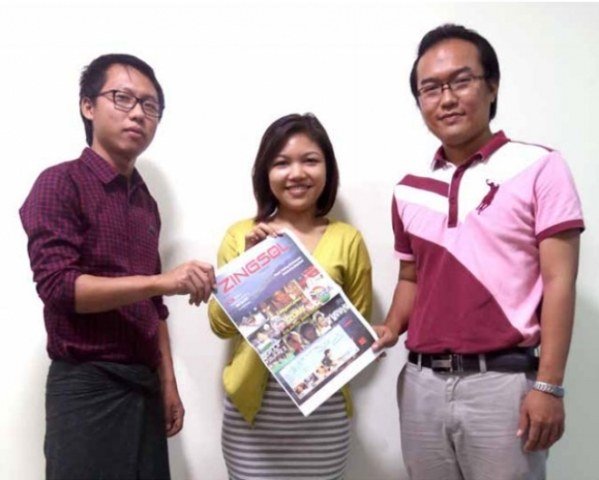 Morning star journal in Chin state is community media at its best: non-profit, volunteer-run, all but free of advertisements and providing information to the most impoverished and isolated region in Myanmar.

Published in Zomi, which uses the Roman alphabet, and also known as ‘Zingsol,’ Morning Star serves Zomi communities in Chin state and throughout Myanmar.

Launched by University students in 1996 as a one-page bulletin, Morning Star has grown into a 46-page journal with a distribution of 2,000. Seven volunteers run the paper – a full time job in itself – on top of their livelihoods.

In the months ahead of Myanmar’s first census in more than three decades earlier this year, the small team found itself reporting on a Chin state “identity crisis,” said editor-in-chief Dr Sian Nun Siam, 28.

Dr Sian Nun Siam knew he wanted to be involved with the bulletin the first time he saw a copy, at the Mandalay campus of the University of Medicine in 2006. While he tried his hand at editing, Dr Sian Nun Siam’s peer, Dr Cing Zeel Niang, 27, took on the roles of contributor, distribution coordinator and finance manager. They are both from Tiddim in northern Chin state.

Dr Cing Zeel Niang said the population count created divisions in the Zomi community because of a cumbersome list of 53 sub-ethnic Chin categories on the census form and included in the 1982 Citizenship law.

Many of the sub-categories were archaic and barely distinguishable – or simply family names, said Dr Sian Nun Siam. ‘Zomi’ was not among them but the closely-related ‘Zo’ sub-category was included under ‘Chin’, which created controversy and divisions.

On one side an activist group backed by the Zomi Congress for Democracy Party launched a section 914 movement and encouraged supporters to identify in the census under the “other” section, for groups not listed among the country’s 135 official national groups.

On the other side, university students and activists were wary of section 914 amid controversy over the self-identification of the Rohingya community in Rakhine state and encouraged the Zomi community to identify under a ‘Chin’ sub-category, said Dr Sian Nun Siam.

“But some people felt being labelled as Chin was insulting; it is a name used by the Burmese who don’t know our language,” he said. “The division came from a need to secure our identity and we understand why some groups pushed identifying under 914.”

As one of the community’s only sources of information Morning Star was in the spotlight and stakeholders tried to influence editorial policy to promote their interests, said executive editor Dal sian Amm, 25. He was approached by a supporter of the Zomi Congress for Democracy Party with offers to pay for distribution.

“Some people want to donate, political parties and businesses, but we don’t want them to have any hold on our [editorial] policy,” he said. “We only advertise a few things – and this depends on if we are short on finances.”

“When we sell papers we use the money for the next paper,” he said.

Morning Star is distributed throughout Chin state and in Lashio, Mogok, Mandalay, Yangon, Kalaymyo, Tamu and Pyin Oo Lwin. The journal is also distributed in Moreh and other small Indian towns along the northeastern border with Myanmar.

“As you know, when you read the newspapers you will not read about Chin state; few reporters go there,” he said.

And conversely, few newspapers make it to the isolated state, in which 73 percent of residents live under the poverty line, according to figures from the United Nations Development Programme.

“We don’t even get Myanma Alin [New light of Myanmar],” said Dal Sian Amm. “Development depends on information and there is a big gap in information and communication – that’s why we are underdeveloped and under the poverty line.”

The March issue of Morning Star, published with the headline “Zomi, where are we headed?”, was distributed weeks before the census began on March 30. It was the journal’s most controversial edition.

“The activist community was sending this message, ‘If you don’t support the 914 code, you are against Zomi,’” said Dr Cing Zeel Niang.

“While activists and local leaders were providing one-sided information, we gave all the facts, pros and cons – the right to choose,” she said.

Some villages involved in the ‘section 914’ movement blocked distribution of the journal and some distributors and volunteers resigned. But, the journal emerged from the controversy as a beacon of independent reporting.

“We try to stand in the middle,” said Dr Cing Zeel Niang.

This Article first appeared in the October 23, 2014 edition of Mizzima Business Weekly.